I Came Back.. You Can Too 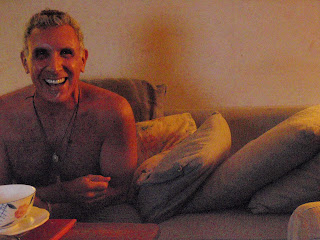 It took me four years full time to get well. What I did was the exact opposite of what I considered (through much meditation, asking, and honest introspection) had brought me to my knees.

The day after my diagnosis I closed my business, went on a fast, joined a Zen group, and literally turned my world upside down. Coming from a technical background where I had trouble shot $60K pieces of video gear day in and out, designed studios, etc. I said to myself "if I can fix them I can figure out what's killing me and fix it too."

So I took my skills and went at my body; researched, asked, busted balls, spent all my money, then begged for free help, went away on retreats, fasted again and again, and in the mist of it signed up for a full load at college which dismayed my friends and relatives for in their minds I was dying and what the fuck thinking going to school. They thought I should go have gone to Europe, Costa Rica, and laid on a beach and died. Instead I studied, sat on my pillow meditating, became close to a qigong master traveling the country to find the best teachers. One time I had to be emergency airlifted home from Boston after four day class arriving at my acupuncturist near death, scarring the life out of him. They all thought I had lost it, but I knew in my knower what I needed to be doing. I knew it was my mind that required healing, that my state of being had become sooo fucked up. IN order to heal I needed to rebuild myself from the inside out. To literally become a new creature.

I ate the wildest shit. I was raw for two years, lived on wheatgrass and sprouts, became soo thin I could hardly stand and knew I need to be nourished. I found a man who told me about the primal diet. A raw diet that included all foods... Meat, eggs, lots of raw butter, goat milk, cream, and raw greens. After 2.5 months eating this way I awoke... (let me say that for years I had bled every day. I’d awake with blood on my pillow, my nose clogged with it, my bed soaked with sweat from night sweats. I would sleep on beach towels to absorb the sweat, changing them many times each nite) that morning there was no blood in my nose and my bed was dry. I thought... hmmm oh how interesting... I will continue.

This was the beginning. In the next two years I worked on my spleen (it was huge), rebuilt my body, continued my schooling and received my Masters in Oriental medicine (April 2010). Today I am well, whole, educated, and positioned to offer hope and help to all those who are willing to any length  to find their healing. Considering my quest, what I was willing to endure, I have little patience for those who whine and cry, saying "I don’t like to eat that, do this".  Fuck them! Let them die (he says with a Buddha’s compassion) I say this for "it's up to us what will happen," personal responsibility is of the utmost importance. Too many people want things to be done "for them," few are willing to do for themselves..

So that’s a thumbnail of what I did. The particulars will take a book, which btw is in the works... All is well dear ones. All is well. So be it...